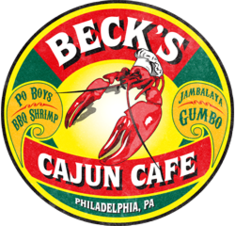 Best of Philly
2011 Sandwiches in Reading Terminal
Beck’s Cajun Cafe
Sorry, DiNic’s, but the authentic muffulettas and po’boys here (which are pretty much the only real-deal Cajun around) have stolen our love.

​The Cheesesteak, Reconsidered
​By Alex Tewfik · 9/22/2018, 9:00 p.m.
30 Cheesesteaks to Eat Before You Die
​In a city that distinguishes itself by its ’steaks, which sandwiches truly tower over the rest? From the South Philly classics to some creative modern updates (including, yes, a vegan cheesesteak), food critic Jason Sheehan presents his definitive list.

Beck’s Cajun Cafe
The cheesesteak’s delicious first cousin twice removed
Look, it would take a lot to improve on a cheesesteak. But if you were going to try, you’d be wise to first check out Beck’s, where they’ve been serving an upgraded model for years now. The Trainwreck is a standard cheesesteak mounted on a French baguette, smeared with Creole mayo, then jumped up with chopped salami and Andouille sausage, onions and cheese. It’s a killer sandwich, made even better with a couple tots of hot sauce. Reading Terminal Market, Market East. Read more at: https://www.phillymag.com/foobooz/2014/12/09/tale-tape-train-wreck-becks/​

Brioche French Toast Bake at Beck's Cajun Cafe
Danya Henninger / Billy Penn
Jun. 25, 2017
If you like over-the-top food, Beck’s Cajun Cafe is a must-visit. Chef Bill Beck first opened his New Orleans-themed stand in Reading Terminal Market in 2009, and has since expanded with a location inside 30th Street Station.
He’s famous for his “Train Wreck” cheesesteak-po’ boy combo (it won Best of Philly in 2011), his authentic NOLA muffalettas and his alligator sausage, but his sweets also impress. New on the breakfast menu is something called a Brioche French Toast Bake, which Beck describes as “French toast meets bread pudding.” Billy Penn visited the tiny open-air kitchen to see how he comes up with the decadent morning treat. Click here to read more. https://billypenn.com/2017/06/25/watch-becks-cajun-cafe-makes-its-most-decadent-breakfast-yet/

Beck’s Cajun Cafe Adds Unusual Kick to Traditional Bayou Recipes
​Drexel University • The triangle.org
By Jared Ely - Feb. 8, 2013
Have you ever had the urge to eat something out of the ordinary? That longing that emanates from deep within the pit of your stomach, the one that moans and cries out in agony for a delicacy it knows it wants but just can’t seem to find? The one that begs not only for sustenance but also a certain degree of pizzazz? I am, of course, speaking rhetorically. Obviously you’ve had that feeling. Anyone with a functioning pulse has had that feeling. It’s the feeling that drives us to take the subway out into the heart of Center City at odd hours of the night to obtain that one exceptional pizza, that one incomparable cheesesteak, that one special cup of coffee that can placate our raging thirst for cuisine. We’re lucky to be in University City. We’re lucky to have all types of food from Mediterranean to just about every type of Asian cuisine, not to mention the American staples and frozen yogurt, no more than a mile or so away from us. But with Beck’s Cajun Cafe now at 30th Street Station, we hit the jackpot. Click here to read more: https://www.thetriangle.org/entertainment/becks-cajun-cafe-adds-unusual-kick-to-traditional-bayou-recipes/